I used to think I would live forever.

When you're young, not only is it emotionally comfortable to ignore death, it's also helpful. It makes you plan for the long term. For example, you should get good grades, get a good education, and build good character habits because those things are going to be especially important if you're going to live forever.

This bias continues into adult life. The infinite life abstraction is a good counterbalance to the cognitive bias of going for short term rewards.

But it breaks down and can lead you astray in a few places.

First, let's put this into perspective. Here's a picture of your life. Every square represents one month in the average American lifespan. 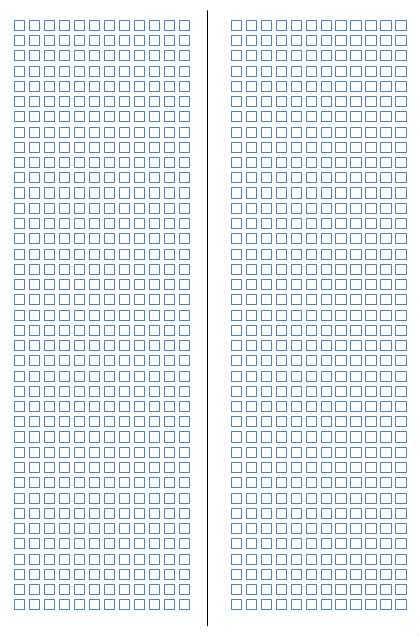 Seriously, think about where you are in checking off those boxes, and think about how quickly you're punching through them. And then think about the things you still want to do in life.

How do we react to this?

If you're only going to remember one thing, remember to apply the "short life" perspective broadly, deliberately, and on a regular basis.

Broadly because mortality effects everything, deliberately because it's easy to forget in day-to-day life, and regularly because life unfolds over time.

Now, for the rest of this blog post I'm going to take the discussion in a direction that is mostly about startups and careers. So be forewarned!

First up, make sure you're having fun.

Realize that life is a journey to be enjoyed, not a destination.

Thus, you've really got to do what you love. It's okay to drudge through some shit for the short term, but make sure you're working in the right direction.

In particular, if you're working in an industry or company you don't believe in, try to tack towards a new direction. Don't settle for boring or irrelevant.

Second, I believe that understanding death can lead you to the right kind of ambition.

Sure, be ambitious, because life is too short to be broadly risk averse. We might as well be bold, and try to do something great.

But most young entrepreneurs don't need to be told to be bold. Sometimes we have a problem with over-ambition, and I want to talk about that for a bit because sometimes it is fueled by a mistaken perception of immortality.

And fuck it; if you're immortal you can reach eliminate the effects of luck over time. You're going to end up a mogul! How can you not?!?

You only get one childhood, for example. No do-overs.

And your window to make a huge impact is very, very small. 99.99% of people don't hit that window. Really, it's the exception.

So be humbled, and check your youthful infinite ambition at the door. There's actually very little time for bullshit.

For example, if you're going to get anywhere, you need a great team. You can't do it on your own, mortal Molly.

You'll need to do everything necessary to make your team successful. That includes making sure the needs of your team members are met, even when they're in conflict with your own ego.

It's telling that Steve Jobs, the ultimate icon of a badass, brings his team members onto the stage at his keynotes to show everyone their great work. And he negotiated for his executive team at Apple to get fresh option grants in 2001 before he said anything about his own compensation.

Well, it was a tough situation, you know. It wasn't so much about the money, because a very small percentage of my net worth is from Apple. But everybody likes to be recognized by their peers, and the closest that I've got, or any CEO has, is their Board of Directors. And as we've seen in the discussions of the past hour, I spent a lot of time trying to take care of people at Apple and to, you know, surprise and delight them with what a career at Apple could be -- could mean to them and their families. And I felt that the board wasn't really doing the same with me.

(..) So I wanted them to do something and so we talked about it.

So, teamwork matters at least because you can't live forever. We basically derived from first principles that you can't do it all on your own, and explained why people with overgrown egos might approach company building from the wrong angle.

And, finally, it's okay if you fail.

It's even okay if you don't go for a huge impact.

Most people are net contributors to society, economically and spiritually, and that takes us all a very long way.

You've just got to do your own thing, whatever that is, and push things in a positive direction. Life is too short to be driven by extrinsic motivation.

...ok, that corniness high note is my cue to wind this down for now. Can you tell that I've been thinking about company building? : )

To conclude for today, you're going to die so try to be rational about it. It's hard to remember on a daily basis that you're going to die, but try to regularly ask yourself if you should be doing anything differently given that life is short.

Put a monthly recurring appointment on your calendar if you have to.

And remember to apply it broadly. Forgive, for example. Be open and honest. This one has wide implications.

More on this topic:

If you have any other thoughts or links on this topic, please share them in the comments! Thanks!