You’re presenting to a room full of investors this week. What should you know?

First, your demo will probably break, but that’s okay. Our demo broke. I fixed the code between our demo and the mingling. I remember telling investors “Look it works now!” but nobody cared. : )

Follow the introductions. Your lead investor will likely be a friend of an angel who you met through the advisor you met at your girlfriend’s father’s 55th birthday party. Joe Kraus has written about this. He says Take a cookie. 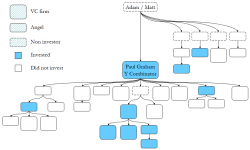 Here’s the tree of how we met our investors, of who introduced us to who. Click on it to get the full version.

I've written about the value of Y Combinator before. You’ll basically be borrowing their network. They kick ass. [1]

So angels can be helpful even if you’re raising a mostly VC round.

It’s an unwritten rule in the valley that if node x invests then every ancestor of x must be given the opportunity to invest. They can’t be cut out of the deal. You can probably figure out why.

Our series A didn’t happen quickly. We excited the people we met with, but we were timid about getting started having recently closed a $100k angel round. One firm had interest, so we thought “We better talk to someone else to make sure we’re getting a good deal.” That incremental approach went on for a few months. We were always in late stages with one investor but just beginning the dialogue with another. Deciding to raise money should be an atomic decision; don’t try to just dip your toe in.

You want a small option pool. The investors will tell you that the company needs a large option pool. Balony. The debate is really about who pays for the option pool. VentureHacks has a relevant article.

Traunching is bad for the company. If your investors exercise the traunche(s) then it means that the company is now worth more than they’re paying you, so you're leaving value on the table. You might want to raise a smaller round and go to the market again when your valuation is higher. [2]

There’s also the 10x rule: you shouldn’t raise 10x more than your last round. I think it’s a pretty good heuristic. [3])

But some people will tell you to take money whenever you can get it. There’s also some truth in that.

Finally, Sam Altman: "Every morning wake up and say to yourself: 'They need me more than I need them.' Entrepreneurs are the limiting reagent in the startup equation, not investors."

At the end of the day I’ve done exactly one financing and have very little experience. There are entire blogs devoted to these topics. I encourage you to read and learn all you can. Ask for help when needed. You’ve got a great network surrounding you.

P.S. In case you didn't receive my previous correspondence, I previously wrote to you about 'Courage to Change Direction' here.

[1] That said, don’t expect them to do the work for you. Just as the summer stage, you get back what you put into it.

[2] Yes, that does mean that you’ll spend more time raising money. And market conditions could change by the time you go to the market again. It’s a trade off.

[3] YC’s initial investment might not apply well as an input to this function.