How to: Compete with Amazon S3 without Buying Hardware

You build a storage router.

Given a piece of customer data you want to store, replicate it 2x, and store half a copy's worth across four different raw storage providers. For example, Rackspace gets one half a copy, as does SoftLayer, GoGrid, and Storm on Demand. Keep in mind that you're buying raw storage from each of these guys, not redudant storage. Each provider is just selling you hard drives attached to the Internet.

Your customer's data will be available as long as two of the four raw storage providers are up.

(To be clear, you would use Reed-Solomon erasure codes. Thus, you could dial in any desired replication factor and any desired number of storage endpoints. [1] The blocks in the diagram below are intended to represent the sizes of the data pieces, not how they are encoded.) 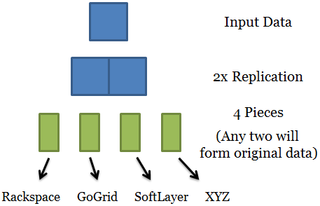 More importantly, this design would create a marketplace for people selling raw storage. Whenever someone comes in with a better price, you seamlessly move customer data from the most expensive of your providers to this newer, cheaper one. Of course you would maintain appropriate quality controls [2], monitor uptimes, backbone redundancy, etc. You're a storage router.

Amazon's storage offering has built up high margins. Up until two months ago, Amazon S3 hadn't dropped prices since its launch in 2006, despite the fact that hard drive costs fall 50% per year. [3]

Those are real margins that Amazon has built up, and even after their recent price drop they're still leveraging a lot of pricing power. There's surprisingly little competition.

The Android strategy for the cloud storage market

What I'm proposing is the Android strategy because it gives them a way to compete, and they're competing on an axis that the new winner doesn't want to compete on: price.

And in this case, since you're running the service that routes customer data into and out of the right storage providers, you control the relationship with the customer, so you get the pricing power.

There are a couple of reasons why I'm not pursuing this idea (in increasing order of importance):

The world would be a better place with a service like this, possibly extending into a marketplace for compute as well. Someone like Rackspace or Softlayer could do it. Google could do it. A startup could do it. Or maybe OpenStack will adopt a model like this.

If this happens, though, I think it will be done by a startup.

What Rackspace, SoftLayer, and others should do now

The big hosting guys should launch a low priced "hard drive attached to the Internet" product. [4] Such a move would pave the way for one or more startups to build the storage router, bringing a new type of innovation to cloud computing.

[1] The replication doesn't need to be uniform, either. For example, if read performance is important maybe one storage provider has a full copy of the original data, and there's another 1.5 copies spread across three other providers for redundancy. The ideal setup depends on the customer's desired tradeoffs. This advanced level of control might also be a competitive advantage for some storage customers.

Update, Sept 2012: You could also consider using the new Amazon Glacier for end-of-line backup, in combination with hot copies hosted by others.

[2] There are many types of quality controls to build. Use a provable data possession protocol to ensure that each storage provider still has its data without having to retrieve the whole thing.

[3] This is strictly true for their first tier of storage customers. Over time they've published volume pricing for higher and higher volumes, though each tier's pricing never dropped. Amazon S3 pricing history: 2006, 2007, 2008, 2009, 2010.