When I was at MIT all computer science majors were required to take a class called 6.001. I had a lot of college credit coming to MIT so I was able to place out of many other requirements, including chemistry, biology, and calculus. I also had a long history of programming experience, so I wanted to skip 6.001.

This was impossible, I was told. Nobody had ever done it.

In a saga that unfolded over the next two months, we negotiated a compromise agreement.

None of that would have been possible if I wasn’t willing to make a (polite) pain in the ass out of myself.

The world has a way of making room for those who just won’t give up.

This isn’t a new concept in startup land. Paul Graham, for example, talks constantly about determination.

So rather than turn this into another post about how entrepreneurs these days need more of X, I wanted to share some scientific research that studies determination, and brainstorm on how we can boost our determination.

Angela Duckworth, from UPenn, has published much about the topic. (Obligatory TED video here.)

She defines grit as “perseverance and passion for long-term goals.” That sounds about right. She continues: “Grit entails working strenuously toward challenges, maintaining effort and interest over years despite failure, adversity, and plateaus in progress.”

Ok. How is grit different from self-control?

Grit is also distinct from […] self-control, in its specification of consistent goals and interests. An individual high in self-control but moderate in grit may, for example, effectively control his or her temper, stick to his or her diet, and resist the urge to surf the Internet at work—yet switch careers [frequently]. As Galton (1892) suggested, abiding commitment to a particular vocation [..] does not derive from overriding “hourly temptations.” –Grit: Perseverance and Passion for Long-Term Goals, page 1089

Ok, so self-control is about not eating the marshmallow right in front of you, and grit is about pushing towards the same goal for long periods of time, even if you don’t get short term results.

How do grit, self-control, and IQ predict success in various efforts? Dr. Duckworth has done several studies. Let’s look at the results of a spelling bee competition. That shouldn't differ too much from entrepreneurship! 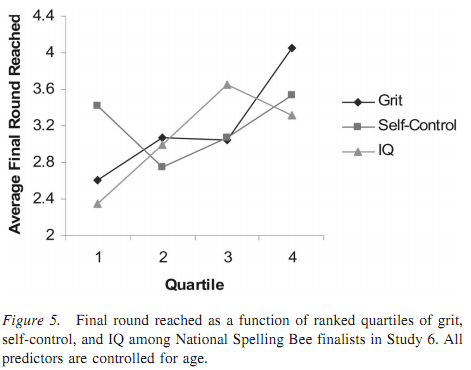 According to this figure, if you could choose to be in the top quartile of participants for grit, self-control, or IQ, you would pick them in that order. Grit > self control > IQ.

That’s not really surprising to me as an entrepreneur, but it’s validating since the world seems to think that IQ points win spelling bees.

Why might most people think that IQ and self-control are more important than consistent, long term effort? There are many possible answers, but Duckworth’s research suggests an explanation I hadn’t thought of before: that it’s harder to observe long term focused efforts by others.

We speculate that individual differences in the intensity dimension of effort are salient and, therefore, described by many adjectives in the English language (e.g., energetic, conscientious, dutiful, responsible, lazy). Whereas the amount of energy one invests in a particular task at a given moment in time is readily apparent both to oneself and to others, the consistency of one’s long-term goals and the stamina with which one pursues those goals over years may be less obvious. Similarly, whereas the importance of working harder is easily apprehended, the importance of working longer without switching objectives may be less perceptible.

Ok, so how do we train ourselves to be grittier?

That’s not clear. Dr. Duckworth is doing research on this question now, so perhaps we’ll have a follow up post in a few years (follow me on twitter here!), but until then here are some thoughts:

What do you think? How can we increase our grittiness and bring it out in others?

(As a homework exercise, consider what you want to be gritty about. Steve Jobs suggested being gritty about finding work you love, doing great work, and finding a great spouse. That's a really good start!)

(Thanks to Zao Yang for turning me onto Dr. Duckworth's work!)