I love Visual Studio 2005. Microsoft repeatedly hits home runs it comes to IDEs. But it isn't perfect; it has two thorns that prick me every day.

First, Visual Studio doesn’t have multimon support. I have three monitors, and only get to write code on one of them. You can open the same solution on multiple VS instances, but that doesn’t work because editing a file in one instance will confuse the other instance.

In contrast, Eclipse really nailed multi monitor support. You can have the same project open in multiple windows, and you can instantly see any edits in all the windows.

It’s funny that this bug impacts our hardware purchase decisions. Because VS 8 lacks multimon support, we prefer one huge monitor to multiple average ones. I’m running 1600x1200 vertical now, which means I can see 80 vertical lines of code at a time. I'm looking forward to getting even more in the near future.

Second, Visual Studio doesn’t have Edit And Continue support for anonymous functions. The code below executes as you would expect. 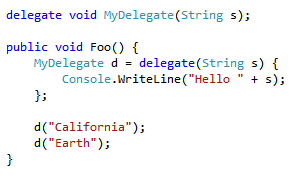 Except that I’m from Texas. We don’t say “hello” in Texas; we say “howdy!” I didn't see my mistake until I ran the code in debug mode, so I hit Pause and change “Hello” to “Howdy.” I hit Continue, but…